Girl on Grime, Hot Action! Must be seen to be believed!

We had a lot of fun today, but it was bloody hard graft. I painted one whole ceiling and half of another. Finished the walls and did a general touch up on all the previously painted areas. Lisa painted up a storm and whizzed round and did all the walls in the workshop. My Man that Can, Matt Suttle came round to give me a nervous breakdown. Oh, I mean a quote for the work that needs to be done in the gallery. He was shown a hole that led to a window and in record speed and for free (phew) he dismantled the faux wall and revealed a fairly ugly barred window. That is covered externally by a steel sheet. So "Let there be light!" I meant to take a picture of it, I forgot you will have to make do with the before shot. 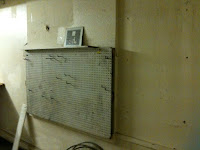 You will have to check in tomorrow if you want to look through the square window. He then showed me my actual ceiling which again is ugly and wallpapered. Bright green and magnolia in places. Colour blind people should never be allowed to decorate. I apologize to any colour blind people who read this but you're not painting over this crazy coloured ceiling.
I have to say by the end of the day the delirious laughter that over took us was largely due to inhaling far too many paint fumes throughout the day. That and relief that the 'Boss' had finally said we could clear the Hell up. Lisa called her the 'C' word today I don't think she likes her much either. I thought it was a bit strong but it did make me laugh.
A bit more hard graft ahead tomorrow have to get the toilet painted. My next blog will just be all before and after pictures. I keep forgetting to take them. As many of my school reports said 'must try harder'.
You should know this has taken me an impossibly long time to write and I'm really concentrating. My jaw hurts from gritting my teeth.