Are Your Eyes Open? 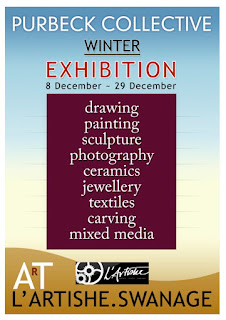 I have to tell you that I had a miserable day on Tuesday, the good news is that 'that was so two days ago!'.
Sometimes I think the best defence that I have is positivity. You should try it, it really does work. Don't get me wrong I have a really good wallow for a while. Then in the words of that famous song 'Pick yourself up and dust yourself off etc'.

I do not know how I can persuade you that you should see this show before it ends. But still I am going to try. There are fourteen local artists/crafts who have put a great deal of thought and effort into their work and you should come and see the outcomes.
They are really something else, but as usual don't just take my word for it.

As you know I am closed in January as I have some refurb work to do at the gallery. If I needed something to get me excited about February then Josh Hollingshead gave it to me yesterday. I am showing the work that I originally chose. I'll explain, Josh entered several of his paintings into Open Exhibitions and kudos to him many were accepted and he won at least one prize. This meant that whilst we had a great exhibition in September there were paintings that I wanted to show that were not there. Or should I say here.
We are remedying that fact by having a second exhibition, so Josh sent me some pictures of his newly completed painting. It is phenomenal I have said it before and I will say it again he is someone to watch.
Here's a teaser! 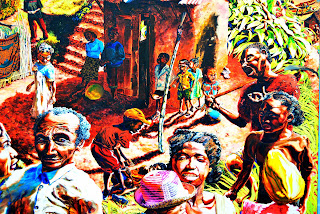