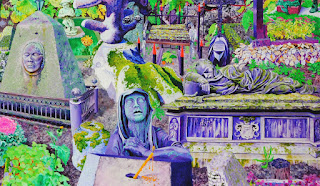 The window smudgers are out in full force and that is because they all want to get a look at the fantastic paintings that are at the gallery right now. I just love to be up a ladder in my best frock (that was an in joke and if you know me you are smiling to yourself right about now!) cleaning windows.
It has been busy again today so let's hope that it is great evening as well.
People are fascinated by the sheer scale and detail in his work. They are crazily good, I bought some of my friends to the gallery last night to have a look, literally seconds later they all had their phones out and taking pictures to post on Facebook. It is just that good.
Do not worry if you aren't able to see it as he will be back in February showing his newest paintings. They are causing some controversy which I think is fantastic. He has his finger on the political pulse and one of his images has caused such arguments that the selection committee argued amongst themselves for an entire day about it.
I think that is exactly what good art should do. Provoke some vigorous debates amongst the art hierarchy. It's when you know that it is working.
I hope that you are making the most of the sunshine because apparently it is all going to Hell in a basket tomorrow. Just in time for my day off.
I have to visit the dreaded IKEA as all of my tables are starting to bear the scars of the workshops that I have been doing.
Wish me luck as I seldom come out with just what I went in for.