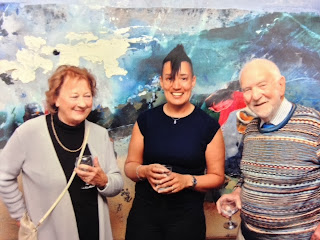 I have been very fortunate since opening the gallery, I have met people who have enriched my life and also supported me and my endeavours at the gallery. I have a lot to be grateful for, even if I bemoan the trivial annoyances I face in my blog.

It has been a sad time of late, I was deeply saddened to hear about the passing of Sir Anthony Caro. He was such a gentleman, and a real artist of the people. He never treated people like they were beneath him. He believed in art and did his utmost to support it.

He and Sheila often popped in to the gallery when they were in Swanage. I was particularly pleased when he visited my exhibition in March this year. He said lots of very complimentary things about my work. A memory I'll treasure.

But the one memory that stands out was our first ever meeting.  I was mid hanging a new exhibition and up to my eyeballs with stuff everywhere. When a couple came to the door and started to come in. I apologised and explained that the gallery was closed.
Tony said ' I know but I'm Tony and this is Sheila and we've come to meet you and look at the gallery'.
I wish I had picture of my face as he then noting my blank expression he said 'I'm Anthony Caro and this is my wife Sheila Girling'. Seriously, you could have scraped me off the floor. Thankfully, they didn't hold my ignorance against me and I went on to show Sheila's work at the gallery.

They continued to support me and both submitted works for my Drawing Exhibition in April this year.

I feel honoured to have known him and I know his legacy will live on with his work. Not to mention his incredibly talented family.
Posted by SLJ Art @ L'Artishe at 03:40