Have A Very Merry One! 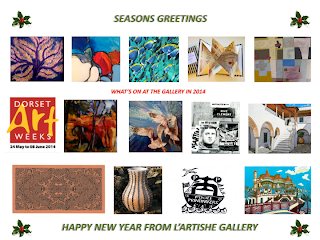 This will probably be my last blog of 2013. That said I am going to take a minute to talk about the best  and memorable bits of 2013.

This year has had its ups and down as people struggle with the recession but the good thing to come out of it is that people are still visiting the gallery and enjoying the exhibitions that they see. That is still a bonus.

I think I have had the opportunity to work with some of the best artists the South West has to offer and that in turn has meant that I have met even more great artists. This has helped to fill the gallery in 2014. I would like to thank all the people who have exhibited with me this year. It means a lot to me that you chose my gallery to show your work at.

There have been some sad losses this year from our local art scene, Stan Smith sadly passed away. I am hoping that in 2015 I will be able to put on a show of his work. I have mentioned before that he was a real fan of the gallery and supported me by coming to most exhibitions. He will be sadly missed.

We also lost Sir Anthony Caro, he was and should continue to be an inspiration to all of us. He was still a very active artist and never stopped and let his age deter him any way. He and Sheila were other kind supporters of the gallery. I was lucky enough to show both of them this year.

There are others who battling health issues and I hope that they make full recoveries and can back on producing art.

I have been quite moved by the genuine goodwill that has been extended to me this festive season. I apologise now for not sending cards to everyone but as you can imagine I now know so many people because of the gallery I would not know where to start.
I have instead pledged to give money to charity in lieu of cards. I also have given a donation of pet food to Margaret Green Animal Sanctuary. I was asking Shirley about Food Banks locally and apparently you can drop food off at the Salvation Army which be given to people locally in Swanage and Wareham. Take a minute to think about if you can help out in any way.

It's a good time of year to do something selfless.

I hope that whatever you do, you have a great Festive Season! See you at the gallery in the New Year!