Blood On The Gallery Floor! 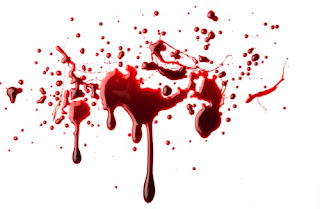 There is going to be a bit of a change around at the gallery so the last two weeks of the show will be a bit different from the rest. I'm going to put some of my work in as there will be space as some is being collected to go into another exhibition.
This morning I have been framing my prints and whilst doing so I managed to chop a fairly sizable chunk out of my left index finger. It was like a bloodbath in the studio. I have always been a bit of a gusher but this was ridiculous. Big fat blobs of blood everywhere. I have told you many times that I am huge fan of thrillers. I totally love CSI with all that forensic science. I had to laugh to myself that they would have a field day in the office and studio as no surface was left unbloodied. (apparently that's not a real word but you know how I roll) The could also have helped me to find the bit of finger I chopped off. Nice!
When the gushing subsided I dressed the wound with padding and bandage only for it to soak through in approximately 4 minutes. I was contemplating whether or not it warranted a visit to the hospital to get it dressed properly. Got some heavy duty plasters instead and so far so good.
Can you answer me this? What is up with people not replying to emails? I have sent about 50 in the last few days and I have received 2 replies.
I am what's known in the trade as a prompt responder ( I just made that up). I get an email and if needs a reply not more than 24 hours will pass before I send one.
That's just me I guess.
Well lot's of people liked the new Facebook site so I got some more followers yesterday. All I need is to get an advert on the television. I'm obviously joking.
I know many of my readers shun Facebook and in many ways I understand why. I am the victim of people trying to be my friend who I neither know or ultimately like. It is a weird phenomena that people find you through a friend and then ask you to be a friend. They say the average person has 250 friends on Facebook. Oh please, really? That's just ridiculous I'm not sure I even know that many people. Let alone enough to call them friends.
I do love being able to leave facetious comments on peoples statuses and the odd poke but in all the time I've been a member (years) I have only asked maybe 3 people to be my friend.
Sorry don't know where that rant came from.
Other gallery news, I have put together the editorial for next months Purbeck Gazette so keep your eyes open for that.
Posted by SLJ Art @ L'Artishe at 06:06