Josh Hollingshead and I Quote 'A Breath of Fresh Air'. 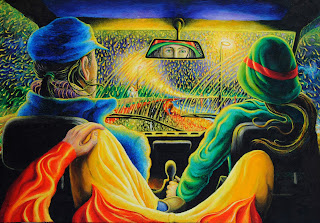 Someone once told me that my blog was far too honest and that I should only magnify my successes and minimise my failures.
There may be some truth in that, but by the same token this blog is called the 'trials and tribulations of....'
It has been one of the most seesaw days at the gallery since I opened. I have the run the absolute gamut of emotions and now I am once again level headed.
Let me highlight the great things that have happened today, some really great artists have agreed to get involved in my Drawing Open. I have confirmed a fantastic exhibition.
I am several steps closer to completing my work for my show, which has now been extended by one week due to popular demand. Not exactly true, one of my exhibitors has had to pull out of his planned exhibition that followed mine. Due to circumstances beyond his control, on the positive side we have already rescheduled it for next year.
The Drawing Open will also have an additional week. The negative is all the correcting of published dates for everything.
My internet will not let me update my website as it is running too slowly. A night in front of the laptop for me.

I have fallen foul of a serious communication breakdown which has left me in an awkward position which has led to me typing this with fingers crossed. They will remain crossed until I get the news that I am hoping for. Feel free to send me your positive vibes.

I have renewed faith in my abstinence of 'joining in'. This is a huge positive, as every so often the seductive thought of being involved in something big tempts me. I am better as a lone wolf who can carefully select my allies.
Ambiguous much? It is a necessary evil now that I know people actually read my blog.