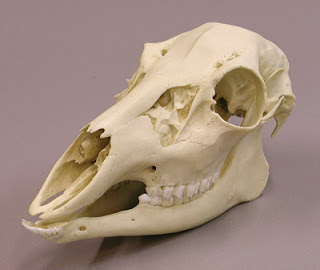 Not much to report on the gallery front as it was my day off. That does not mean that it was not eventful as I managed to pack an awful lot in. For my regular readers you'll know I was trying to chore dodge today, but you will also know that I have OCD cleaning tendencies so I was seduced by the hoover, the washing machine and the antibac' wipes for a few hours this morning. I managed to escape and actually have some fun.
I went bone collecting today, I am disconcertingly interested in the inner workings of previously living things. I spotted a deer skeleton a couple of weeks ago and was determined to get the skull and so I had a collecting mission and got the skull and two hundred yards down the road I found an antler, I thank nature for the beautiful bounty.
Straight from there to the skate park and went on a skateboard for the first time in 28 years, it was great and I did not fall off once but I now want a long board. Maybe that's will what I'll ask for, for my 41st birthday.
A quick haircut then went to a Private View of Elisabeth Frink, it was great. She produced some truly great art. I bumped into several people that I know so it was also nice to catch up with them.
Printing all day tomorrow so looking forward to that.
Posted by SLJ Art @ L'Artishe at 14:01