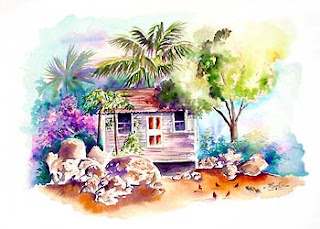 I have to apologize for my absence but I have been totally uninspired and rather than bore you to tears I thought I'd save you from my inane rambling.
It has however been a good week. Plenty of visitors to the new show and a few sales. I hope that you are able to come and see this show.
A totally random thing yesterday, a man came into the shop and said 'I need to ask you a question'. I said fine fire away. He said 'I was at Studland an a woman in the National Trust shop told me that you are from St Kitts, do you know Leonard James?' I said that I didn't he then reeled off a lot different names of people he knew and it turns out that he knew my grandfather Sir Maurice Davis, and his wife, several other relatives on my Mums side and quite a few of friends of my Dads. It was crazy he just kept firing names at me that I recognized.
It was really nice to have a chat with him and his wife. I rang my Dad who informed me that I did in fact know Leonard James as I'd met him when I was in St Kitts.
Crazy stuff, but it made a nice change from chatting about art.
I have had the morning off and I spent it lazing around which was much needed as I had been feeling very tired due to the whole two exhibitions up and down in 10 days. Phew!!
I am starting to get booked up for next year already which is great. I am having my show in March so I must get busy and make some.
I should explain the picture for todays blog. Barbara Kassab is an artist that lives in St Kitts and when I was there I went to her house. I had definite house envy it over looked a place called Frigate Bay which is stunning. I though I would use one of her pictures as she was someone else that my visitor yesterday knew too.
Have a fantastic weekend and I hope that the sun shines for you!