Ferry Across From Sandbanks!

DO NOT be put off by the fact that the ferry isn't running until December. It is annoying I know but the road to Swanage is still open and despite the horror stories in the press I did the return trip to Poole on Saturday in virtually the same amount of time that it takes via the ferry.
It is disappointing that business owners in Swanage have been thwarted by weather, the Olympics and now road works. It was a tough summer for many as visitor numbers were down. Now we are being hit again.
The idiocy of planners in this area! Would it be too much to ask that they liaise with each other every so often.
Well, I think that the fact the ferry was off on Saturday did impact on how many people came to the PV which was a shame because the work looks stunning.
http://www.saatchi-gallery.co.uk/ns/profile/mark+lloyd/2748
We found out that Mark has been featured in the Saatchi New Sensations of 2012 website. Click the link to find out more.
This is good news indeed for Mark he works hard and he deserves it.
I also found out that Josh Hollingshead who exhibited with me in September one the prize that he was nominated for and is currently being exhibited at Pallant House. 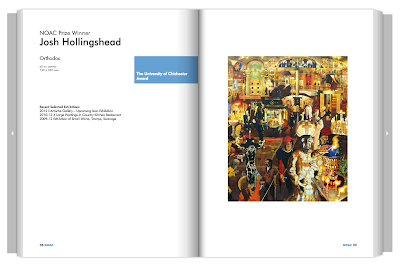 I told you he was one to watch. It will be appearing at the gallery in February so please come along and see it for yourself.
Date for your diary, Saturday 8th December will be the start of the Purbeck Collective's Winter Exhibition. It promises to have something for everyone. Join us for mulled wine and mince pies.