I see an Object and I want it painted Black! 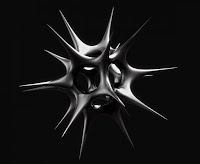 Today has been a day of many observations. That's what happens when you spend a lot of time on your own doing mundane jobs. (Mundane is my word of the week). I realized today that for the last 35 years give or take a couple my life has been structured around big changes in September. From Primary School moving up to a new year and that being repeated virtually every year until I was 24 in one way or another. Then there were the vacant years (approximately 2) where I drifted about directionless. In that post education fog that I found myself in. Then in a moment of inspiration I decided to learn to be Lecturer which began a further sixteen years of being dictated to by changes in September. Thinking about that I then realized that the whole gallery project was another September change as I got the keys on September 4th.   It does make me wonder what next September has in store for me as it seems to be a month for change and transformation.
My other less lengthy observation is that I have managed to work out exactly how many layers I need to wear in order to be warm in the gallery. 1 x Thermal Long Sleeve Vest, 2 x Long Sleeve Tops, 1 x Hoodie, 2 x Pairs of Jeans and 1 Beanie Hat.
I am hoping that when the ceiling is in and there's carpet and heating I'll be able to wear less. Oh, and the doors aren't open to let out the noxious paint fumes.
Having read all of that you are probably wondering why the obscure title? Well, it's what I've actually been doing today. I have been rejecting white in favour of black and it's made a nice change. But I do look like I've got the hands of a coal miner. My white keyboard is not being particularly forgiving either.
The good news is my thumb is on the mend. It's not swollen anymore and I can bend it a bit more today. I have made the executive decision not attempt my ceiling tiles solo, as I found out yesterday when I get up a ladder I discovered my 'inner girl'. People have been surprised when they see how much of the manual labour I've done myself and that does give me a sense of pride. Being up a ladder however, makes me feel clumsy, slightly hysterical and altogether like I'm out of my depth. I do not like it. I have these dark fantasies that involve me falling off the ladder and lying prone on the floor for hours, possibly days. Feebly crying for help whilst people just keep walking past. I'll be doing as little ladder climbing as possible in the future.
Neil, my website designer came by to show me my splash page for my website. It looks great, I am very pleased there are just a few tweaks needed and soon we'll be ready to rock and roll.
I'm knocking off early as I have nothing to do until all the wet paint dries.
I forgot to mention my friend another artist James, is going to come and see me tomorrow. He's a bit of a recluse so it's a real honour for him to step outside his front door let alone come across the water for a visit. I'm hoping that he will be bringing some of his work with him as it's been a while since I've seen any. I'll keep you posted. (That's a little Bloggers Joke)
Posted by SLJ Art @ L'Artishe at 07:18