Getting down and dirty. 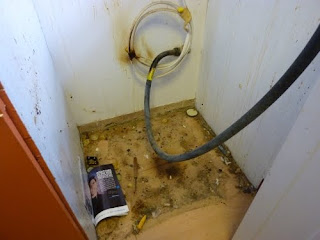 I was trying to think how I could best describe the dirt and muck I had to deal with today. I wanted to conjure up the level of filth in a way that everybody could relate to. Most people have moved a cooker at some point and are fairly horrified that it's quite so dirty in an area that you cook and prepare food. If anyone asked you would probably say my kitchen is clean. So now imagine a place where no food needs to be prepared. A place where thousands of bikes have been through during the last 12 years. A place where bikes were taken apart and various parts were washed in the sink that coffee cups are washed up in. There was a grease scum line around the entire building. I have managed to degrease one room and fill about 150 holes. One coat of industrial white paint and its looking much better. I'll upload pictures later. I'm absolutely shattered. I think the previous owner thought hygiene was how he greeted his friend called Jeanette.
On another note at least 5 people came in to ask me where their bikes were. Maybe I should seriously have considered remaining a bike shop. Just kidding.
I'm going to post the pictures later so you can see it for yourself.
Posted by SLJ Art @ L'Artishe at 08:31